skip to main | skip to sidebar

I am selling 5 blisters of the limited edition OOP standing at ease Imperial Guardsmen looking to get $15 a piece for them, if you buy all 5 ill ship it to you for free. All are NIB. Need to earn some extra cash for my new baby. thanks
Posted by The Vern at 8:50 PM No comments:

Annihilation Barge 90pts
Posted by The Vern at 1:43 AM No comments:

The Haven's Guard of the 22nd(c) a Rough Riders Company 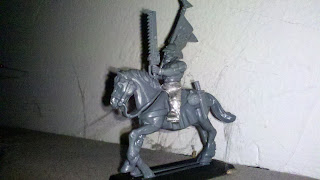 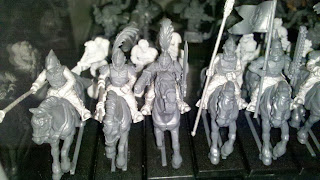 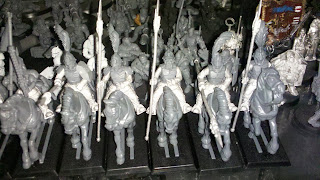 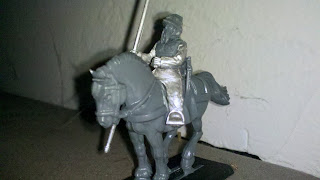 The Havens Guard is a company of Cadian Rough Riders trained by the 112th Korvin Lancers during the 112ths temporary assignment to the Regiment during the Athereal Campaign. The 112th Lancers came from the noble houses of Korvin whom fought against Tau expansion into the system by manipulation of trade and information brokering. While many of these Noble Houses were toppled in their attempts their progeny lived on to form brigades of mounted Calvary that became a symbol of Korvin's refusal to acknowledge Tau control of the core planets. While many of the original brigades fell in combat against the war machines of the Tau empire their legacies lived on through the training of such elements such as the Havens Guard of the 22nd(c). Mostly of Cadian stock with few Catachan members the Havens Guard were formed to meet the need of highly mobile heavy troops on the battlefield when conventional vehicles such as chimera were not available. As their skills were honed along with veteran status the Havens Guard adopted the use of lances with shaped explosive charges, chain and power weapons and other unconventional mounted weapons. The Haven's Guards own commander Captain Rook carries a plasma pistol from his days as a line officer in the old 22nd and a power sword in his augmented arm.

The Havens Guard adorn themselves with traditional Cadian gear, armored spats, trousers, and flak armor are common, those who were trained by the original Lancers wear ornate shoulder armor gifted to them by their noble mentors, all members of the company wear the ornate heavy war helms of the 112th, some with red plums of feathers an odd eccentricity allowed by Colonel Pike and high command. Members of the Haven's Guard are also afforded special grooming standards in recognition of their noble origins, men of the Havens Guard rarely shave leaving them with full long beards in accordance with Korvin Military traditions.

When on parade the Havens Guard always forms the vanguard leading the regiment in presentation followed by the Regimental colors and command company, General Clare always amused with the eccentric behavior of his Cadian brethren uses them when parading for High Command, something the men of Havens Guard seem to enjoy not to mention the special R&R privileges such service affords.

While the Havens Gaurd has only been in service for a short while their utility in combat has afforded the 22nd(c) advantages other regiments seem to lack and a shock value to xenos enemies at the sight of a line of Calvary bearing down on them in combat.
Posted by The Vern at 12:59 AM 1 comment:

The 22nd Cadian Fusiliers is a consolidated Regiment made up primarily of Cadian ancestry with support elements of Catachan acting as light troops, and light Calvary. The Regiment often supports an array of chimera transport, Battle Tanks, Artillery, Sentinel Scouts, and heavy weapon platoons but due to the nature of a consolidated regiment availability between theaters of conflict do not ensure the operational status of such fighting vehicles of the Imperium.

The 22nd's History began shortly after the first Ethereal conflict campaign where the Tau Empire launched an invasion on Sub Sector Atherton, Colonel Loveless in command. The 22nd was among a small armada of transport vessels sent to the sector to reinforce the local planetary defense forces The army group under the command of General Clare was split into three prongs and sent to the sectors three planets. The 22nd was sent to Korvin, upon arrival it had engaged two Tau regiments which resulted in the first engagement the Tau retreated but came back for a second clash which resulted in both forces taking tremendous casualties. The Regiment now at three quarter strength was then sent to provide relief for a Catachan scouting brigade which had been battling Tau path finders ahead of the main advance in the Korvin jungle region. When the 22nd arrived they found that only three hundred of them survived but they had beaten back three Tau offensives with out the aide of heavy troops or mechanized units. The newly combined force then weathered three more assaults until the main body relieved the Cadians and Catachans. The Cadians were now down to two thirds their original number and the Catachans had lost over a hundred and fifty more men. The Catachans highest ranking soldier was a lieutenant Valden, General Clare ordered the 22nd absorb the Catachan forces, with the Lieutenant being promoted to captain in command of the Catachan forces under Major Pike, the regimental combat teams commanding officer. Also at this time to ensure smooth integration Commissars were assigned to the Regiment to ensure cooperation between the Cadians and Catachan. The next three months saw only a dozen summery executions for misconduct, most of which were attributed to failure to adhere to orders given by a superior officer and murder, once the commissariat weeded out the bad elements the regiment became more harmonious.

Joined by a Regiment of rough riders the 22nd(c) was assigned to pacification of former human townships which were aiding the Tau empire in the war efforts. In a span of two weeks the regiments fought 26 engagements with minimal casualties. It was during this time that many of the Cadians learned horsemen ship from the temporarily assigned rough riders who would later form the Havens Guard commanded by Captain Rook.

Two years into the Campaign the former Line company of shock troops were now a very diversified regiment with light, heavy and Calvary troops. General Clare assigned the 60th Storm Trooper Company during the assault of Korvin's Capitol spire. Over twelve regiments took part in the assault with the 22nd(c) held in reserves for the first week of combat. On the 8th day General Clare ordered the 22nd(c) to the front with the orders to attack attack attack! General Clare ordered the 22nd(c) along with three other regiments to weakened positions along the Tau primary defense line in hopes that the fresh regiments could bolster forces already engaged and give them some much needed relief. Utilizing the Catachan light company as skirmishers Col. Loveless issued them orders to probe the enemy defenses and strength. To the Catachan credit they did just that and were able to even penetrate sections of the Tau line and set demolition charges which would later be detonated during the regiments main push a few days later. With the Catachans in the rear of the regiment recuperating from the last few days action, the Colonel Ordered Major Pike and his combat companies into uniformed positions ready to assault the weakened sections of the lines with the storm trooper and Calvary companies in reserve. In the first few hours of the assault , Major Pike was grievously injured when a kroot counter charge ran straight into his command squad, major pike would loose an arm as a result and was sent to the rear. Colonel Loveless took personal command of the front line operations and drove his regiment up and over the tau's defense lines the demolition charges finally bringing down vital wall sections and defenses but the price was steep and the regiment had lost most of its operational capability due to an overwhelming amount of wounded. The shattered companies were consolidated and reformed a thick line of defense while the colonel awaited orders and relief from General Clare, help which would not come for another three more days as the entire front had been brutalized by ferocious Tau and kroot defenses and counter attacks. Colonel Loveless met his end when an infiltrator team of stealth suits assassinated him during a small engagement with path finders, the Tau using the loss of leadership and morale sent in a horde of kroot carnivores which racked the lines and further decimated the heavy troops numbers. Major Pike still in the medical bay heard of the assault, the loss of the colonel and immediately assumed command of the regiment, still missing his arm and full of stims he marched the Catachan and Storm trooper companies to the front and ordered the Havens Guard to counter attack the Kroot horde. The charging Calvary out flanked the kroot and rolled up their lines, the brutality of the kroot were matched by the ferocious death worlders of Catachan while the Stormtrooper Company rallied and secured the fractured Imperial lines. With the battle won and all forces committed to battle Major Pike still wounded held the company together long enough to allow for General Claire to send in reinforcements and continue the momentum the 22nd(c) had purchased.

The battle was costly, most of the veteran officers including the colonel were killed, the eight companies of shock troops had been consolidated to four and only two platoons of Catachan remained. The Calvary did their job and suffered only minor casualties while the stormtroopers company suffered only injuries and did not loose a single man. Major Pike was promoted to Colonel by General Clare and fitted with an augment arm just below the arm pit a touch which endeared the Catachans to remember their legendary colonel Strakken Iron hands.

The regiment was ordered to maintain the gateways they had won and soon received reinforcements from the Cadian 86th, Cadian 24th, Cadian 6th Armored and the 376th Catachan Expeditionary force all which had suffered high enough casualties to warrant their dissolution and absorption into other regiments that needed reinforcement. The newly reinforced 22nd(c) now had Battle Tanks, heavy weapon squads and enough Catachans to have two full companies of light troops.

Six weeks later Imperial forces had finally taken the Capitol Hive, the 22nd(c) was sent to rest and heal after the short but brutal campaign. Colonel Pike was given commendations for heroism and his personal actions which lead to the victory, the 22nd(c) were also given battle honors for their colors.

In the next several months the 22nd(c) underwent new training regiments, indoctrination, and resupply. The amalgamation of almost half a dozen regiments made the 22nd(c) the most diverse regiment in General Clares battle group, a benefit that General clare used on several occasions from pacification of human populace under going reeducation following the retreat of the Tau Empire from the system, to clashes with dark elder raiders and the occasional Tau hit and run.
Posted by The Vern at 12:36 AM 2 comments:

Due to my awesome girlfriend who works in the media world I have professional passes to both WonderCon in SF and ComicCon in San Diego.

I want to do a costume for it and I wanted to go dressed up as a guardsmen. After thinking about it long and hard about it due to finances and my own abilities I am going to go with one of the old school stormtroopers with beret.

Not sure what else to include.

Any ideas are very welcomed.
Posted by The Vern at 9:40 PM 2 comments:

Does anyone have the backpack that came with the Apocalypse special edition they want to sell? Or know where some might be for sale?
Posted by The Vern at 9:38 PM No comments:

Does anyone have one where I can use magnets to use both Manticore and Deathstrike tanks?
Posted by The Vern at 8:37 PM 2 comments: